Why did we change your collection day? 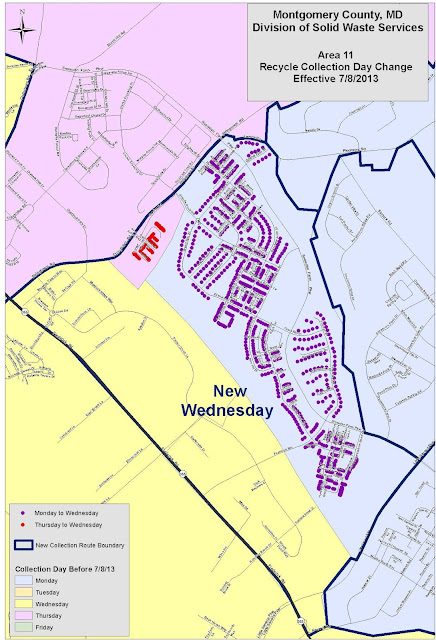 The Division of Solid Waste Services and our collection contractors continually monitor the actual and the planned development of single family houses in the County to review load balancing of collection services. Determining routes, including the day of the week and the truck to be used for collection, is based on house count, house type (detached or townhouse), distance, and traffic patterns. Tweaking of routes that don’t affect day changes is transparent to residents.

However, occasionally we must change the day of collection services. This recently happened in Clarksburg, due to the rapid development there.

We do not take the changing of collection days lightly. Using maps, we work with the collection contractor to verify new route boundaries. Again, house count, house type, distance, and traffic patterns are reviewed. Once the new route is determined, we use maps and map data to identify individual houses that will be affected. From this, we create address lists. Then, our Collections team starts the process of notifying the residents.

If your day has changed, remember that all Montgomery County provided collection services will be moved to that new day.

Look up your collection day

Black-Eyed Susan spotted... in the street!

No two days are the same for our recycling and trash collection field staffers... including the beauty they discover in unexpected places.

Field Staffer Jim F. spotted this tenacious Black-Eyed Susan in a Silver Spring neighborhood, growing out of a crack in the street pavement: 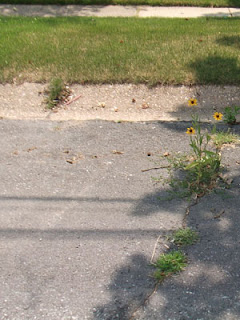 -- posted by Susanne
No comments:

Links to this post
Labels: Seen at the curb

When a valuable item gets recycled by mistake

Earlier this year, a Montgomery County Customer Service Center representative took an urgent call: the caller's iPad had somehow ended up in the household's blue recycling bin. The recycling truck had been there about a half hour ago.

Within five minutes, we notified the field staffer in the caller's neighborhood and began researching in the office as well.

In order to have any hope of recovering the missing iPad, the truck had to be caught before it unloaded at our Recycling Center.  The race against time was on!

We identified the route on which the home was located, and from there, which truck serviced this route that day.

Whew! The truck was still out working. In the meanwhile, Recycling Center staff went on alert to divert the truck when it arrived.

Once at the Recycling Center, the truck unloaded in a separate area of the building, so that its material would not mix with that from other truck loads.

The caller had been waiting at the Recycling Center. Wearing safety gear, she began her search for the device.

Even when a truck's load can be isolated, success in finding a missing item can be elusive. By this time, the item has been well-mixed in with the other material in the load.

We hope that you never need this information. However, if you have something which ends up in your bin or can by mistake, we have detailed instructions on recovering a valuable item from the trash or recycling.

What was the outcome of this case? It had a happy ending! 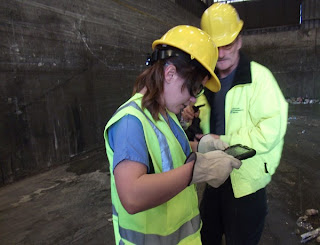 This refrigerator was scheduled for a scrap metal pick up: 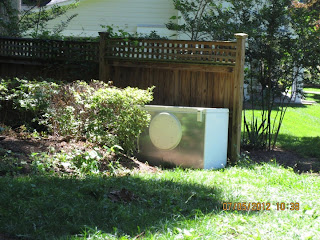 When the scrap metal crew arrived, they were confused! They spotted this refrigerator, but it was tucked against a fence, and partially hidden by shrubbery. It didn't look ready for collection. Was that the item for which the resident had requested pickup? They had a refrigerator on their pickup list for this address, but this one was not at the curb.

Help keep our collection crews cool by getting all your items properly prepared and at the curb by 7 a.m. To signal that they are for a trash or recycling pickup, place the items within 10 feet of the curb. Will you be away on your collection day? Ask someone to get your items into position for you.

Links to this post
Labels: Notes from the field, Scrap metal

Take some of the heat off our yard trim collectors!

The summer heat is on! On these sizzling days, let’s take some of the guesswork out of picking up your yard trim (leaves, grass, and brush).

First, remember that all recyclables must be at the curb by 7 a.m. on your collection day. If you have landscapers working on your property, you may want to schedule them to come on a different day.

Here’s a brush pile I spotted last week. Oops! That orange sticker means that it was set out improperly. In this case, it was piled loose at the curb, without having been tied into bundles. 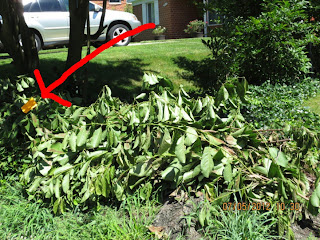 When I spoke with the residents, they asked why all the yard trim had to be bundled or put in bags. "It’s so much, how can we do that?"

In order for yard trim collections to run efficiently, crews need your material to be pick-up ready. If you cannot tie your material into bundles, or put it into paper yard trim bags reusable containers, an alternative is to hire someone to assist. 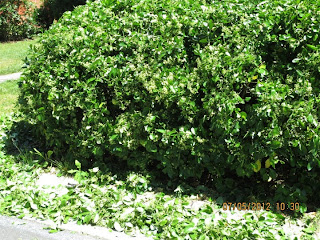 We’ll pick up all of your prepared yard trim material, year-round—there’s no bag limit, and you don’t need to make a special pickup request. 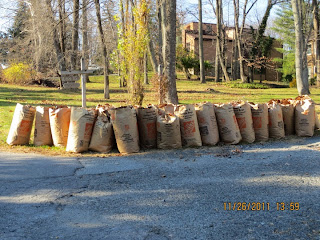 Thank you for helping our collection crews help you!

Visit our website for more information on how to prepare leaves, grass, and brush for curbside yard trim collection.

Links to this post
Labels: Seen at the curb, Yard trim

Tree crushes recycling cart, but not our recycling spirit!

Although we try and collect all recycling left at the curb, sometimes we just can’t get to the containers.

Field Staffer Ron snapped these shots of a paper recycling cart trapped by a fallen tree after a recent storm. 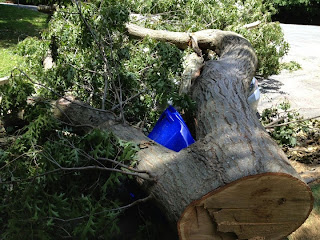 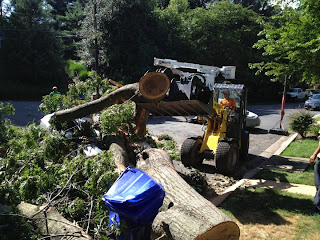 Links to this post
Labels: Paper, Recycling, Seen at the curb

Following up on a report that our holiday reminder emails included, em, poetry, Washington Post reporter John Kelly investigated. Read his column today for the scoop.

Better yet, visit www.montgomerycountymd.gov/solidwaste to sign up for the reminders so that you won’t miss a single recycling/trash collection holiday… or poem.


Having a picnic? Take time to recycle your paper, cans and bottles! Exercise your freedom to Reduce, Reuse and Recycle! Download this poster, and hang it near your trash can and recycling bin to help your guests know what to discard where.

For more information about recycling, visit our Division of Solid Waste Services website.

Thanks to our friends at the Frederick County Department of Solid Waste Management for sharing their recycling poster with us!

Historically, the County provides recycling collection service to all residential properties, with the exception of incorporated municipalities. Trash collection service is provided only in the down county (e.g. Bethesda, Chevy Chase, lower Silver Spring, and Wheaton).

Through a petition process, residential communities can request to receive trash collection service from the County.

When we receive a petition, maps play a big role. Using those maps, we can analyze the area, isolate the properties involved, and convey the information to residents, collection companies, and Solid Waste staff.

When a community’s petition is successful, its Solid Waste fees are adjusted for the change in service.

Our most recent addition is 89 properties in the Colesville Farm community of Silver Spring.

See details about the petition process

We welcome your comments on our blog, and review them per Montgomery County's Social Media Policy.